The 3rd book in the Lake of Sins series, Hangman’s Army by L. S. O’Dea has just been released and I can’t wait to read my copy. Look out for a review in February!

If you havent already you can see my reviews for the previous titles in the series here :-

It’s fantasy..dark and gruesome secrets will be revealed!

To get your free copy for the first two books in the series click the image below! 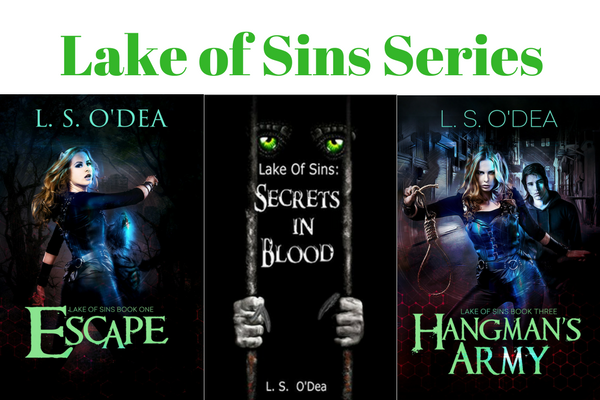 Another bonus is that the author has kindly agreed to a guest post to give some background to the hierarchy within the series. Enjoy!

David was kind enough to ask me to write a guest blog on the hierarchy of the world of the Lake of Sins.

Book one in the series (Lake Of Sins: Escape) is told from the point of view  (POV) of two Producers.  This is probably not the best way to start the series since Producers are the lowest of the classes and have a very limited view of the world as a whole.  Originally, the first two books were combined, so you did get a broader world view due to parts of the story being told through the POV of Almightys and a Guard.

However, the book was too long for traditional publication and I was told by an agent to either delete about 100,000 words or break it into two books.  I reworked the original to create two books and here we are.  For some, the hierarchy of the world of the Lake of Sins is confusing, until they read book two.

This should help readers who haven’t read book two.

Think of Producers as field slaves who are kept uneducated and isolated.  Field slaves unlike house-slaves (or in this world House Servants) do not know the structure of the society as a whole.  They only know their world.  They understand that there are different levels of “masters” but they have no idea about the government and even the workings of a small town.  They know their village and farming and that’s it.

Now, Trinity, the main character (MC) is a little different because her father, who is a House Servant, taught her to read.  She knows a little about his life with Almightys and has a slightly broader world view but not much (although she understands a lot more by the end of book one).

So, let me present to you the Hierarchy of the Lake of Sins! 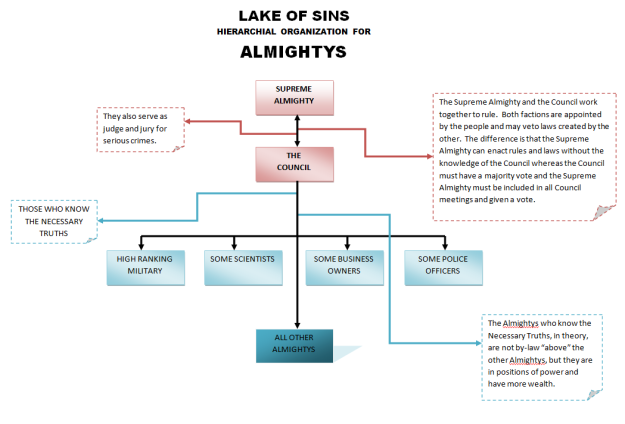 I really hope this post gives you some interesting background to the social structure. It’s very easy to follow during the books but for me this is a unique series and I wanted you to know more about the world L. S. O’Dea has created . Here’s some useful links :-

Remember to get the first two books in the series for free click the image below!