It’s been a while since I last posted… where have I been?.. I’ve been very quiet on my blog

2020 was a bust for me reading wise. Lots of personal things that sucked my energy dry at times.

It was a tough year for everyone and that really reflected in the energy I gave to my blog. I put 100% into my reviews as always, I just didn’t have the energy to keep of momentum going.

I’ve started 2021 fresh. I’ve some good ideas where I want my blog to go and which authors I’m going to concentrate on this year so do look out for more details coming soon.

I promised myself my blog was going to be a true reflection of my reading. There’s new releases coming out all the time but there’s diamonds already out there overlooked by the passing of time so 2021 will be a mixture of new releases, blog tours I’ve signed up for and some older books from my personal collection.

The first thing I need to do is plan the hell out of my diary. I’m hoping to set time to update my blog regularly but also plan on attending online bookish events since Zoom has taken over the world. I attended a few last year and I really enjoyed them.

I’m even getting the kids involved this year and hope to branch out and do a few children’s books reviews.  Afterall… I’m reading them with them 😊

I do hope you’ll join me on my journey in getting my mojo back!

David’s Book Blurg is already booked up until April! And I’ve got some amazing reads coming your way!

You’ve probably noticed but this thing called a virus is going about so many people are now stuck in doors..I hope you are all keeping safe in these uncertain times. I have the pleasure of being classed as a essentially work but when I do have a few moments to relax around work and home schooling I still like to get to grips with a good book.

Today I wanted to share a few upcoming books on my TBR list, Click the pictures to head to Amazon if you want to know more 😊..tell me what you think and hit me up with your own isolation reads.

Footprints in the Sand by Pam Lecky

Cairo 1887: A melting pot of jealousy, lust and revenge. Who will pay the ultimate price?

Lucy Lawrence throws caution to the wind and embarks on a journey of self-discovery to the land of the pharaohs.

Travelling to Cairo as the patron of the charming French Egyptologist, Armand Moreau, Lucy discovers an archaeological community plagued by professional rivalries and intrigue. It is soon apparent that the thriving black market in antiquities threatens Egypt’s precious heritage.

When the Egyptian Museum is burgled, Lucy is determined to solve the case, much to the annoyance of the local inspector of police, and the alarm of Mary, her maid. But when an archaeologist is found murdered in the Great Pyramid, Lucy is catapulted into the resulting maelstrom. Can she keep her wits about her to avoid meeting a similar fate?

Betray Them All by Keith Nixon

It’s 3am on a wet, dreary morning in the south of England. Detective Inspector Solomon Gray raids an ordinary-looking house, but inside he finds the exception: an illegal cannabis farm run by a sixteen-year-old held against his will.

Within minutes Gray rushes to another nearby incident. A homeowner has stabbed and seriously wounded a burglar. Semi-retired Charles Sowerby, claims self-defence against the intruder – a traveller by the name of Aidan Jupp, a man with a violent history of targeting society’s most vulnerable.

Somehow the cannabis farm and the stabbing are connected. Can Gray figure everything out before local tensions boil over? 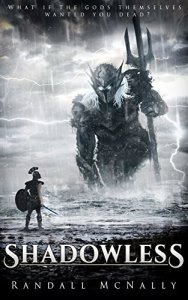 What if the gods themselves wanted you dead?

A young boy lies on a beach on a warm summer’s day. While trying to block the sun from his eyes Arpherius makes a shocking discovery; he has no shadow. Confused and bewildered he asks his uncle why he is shadowless. What he learns is a terrifying secret that will change his life forever.

Set in the Northern Realms, Shadowless is a fantasy novel about individuals born without a shadow. Spawned by the malevolent deities of this world these children of the gods are persecuted at every turn. Hunted by the high priests who carry out the wishes of their gods, hunted by the Shadow Watchers; armed soldiers who are assigned to each temple, and hunted by the gods themselves.

Part-mortal and part-god, the Shadowless live for centuries and face a battle for survival, constantly on the run or hiding in far-flung corners of the Northern Realms.

Soon their lives and fates become intertwined, expedited by the mysterious monk Amrodan. Driven by a series of visions Amrodan travels through the Northern Realms, seeking out the Shadowless and trying to enlist their help to take a stand and fight back against the gods.

The Good Hawk by Joseph Elliott

If everything was taken from you, what would you do to get it back?

Agatha patrols the sea wall with pride, despite those in her clan who question her right to be there, because of the condition she was born with.

Jaime is a reluctant Angler, full of self-doubt and afraid of the sea.

When disaster strikes, the pair must embark on a terrifying journey to a land where forgotten magic and dark secrets lurk in every shadow…

“Reasonspace is in shambles after the disappearance of all magical creatures. Without faster-than-light travel, supply and communication routes have dried up, leaving humankind stranded and starving. Cowboy Jim and his complement of Reason soldiers search for the relocated Bala using the only surviving FTL drive. On their new utopian planet, the Bala are on the brink of civil war between those who want peace under old-fashioned unicorn rule and those who seek revenge on their human oppressors. Only Captain Jenny and her new brain parasite can stop the Reason plan to enslave the Bala again.

That’s it from me today.. I’ve loads more on my list to share with you so keep an eye out. Whatever you do during isolation..stay safe.

Some of you will know I’ve had an issue with nerve pain recently in my right arm..and I’m right-handed so giving my best to a review has been hard to do over the last few month.

With my accent speech recognition inst a viable option ha.

The good news is I feel I’ve turned a corner.. thanks to the wonder that is amitriptyline which has completely stopped the nerve pain. Still not fixed but at least it’s manageable now.

Bumper week to follow on my blog while I catch up, lots planned, Q & A’s, blog tours etc and I just can’t wait to get back into the swing of it.

I’m fully on track for deadlines set just need to catch up on all the non specific deadline reviews.. I really do apologise if you are still waiting.  Give me a nudge (nicely ha)  🙂

Hope all of you have a great weekend.

I thought it might be interesting for you to find out how i came to setting up this blog and how I’ve found the authors i have. I would be very interested to hear your own story’s

As a child i struggled with printed format, my eyes would get tired and blurry. Even after getting glasses i still struggled.

Up until a few years ago i basically never read any books other than what i needed to get by in life, instruction manuals etc.

One day i decided to treat myself to a tablet for twitter/emails and so forth. I found the kindle app and decided i might as well give it a go. I travel to work on the bus so have plenty of free time.

Not being a big reader i decided to look at the free books listed on Amazon under the genres i liked. I thought this was a good starting point and it introduced me to authors like David Dalglish and Michael R Hicks. Both authors offered the first book in one of their series for free and i liked the idea of getting into a series on books rather than just a stand alone novel.

Next i found Robert Southworth, I’m a massive fan of Spartacus and he had recently released a story about him and it had me hooked. This then led me to Gordon Doherty and his Legionary series

From there i headed to twitter, followed these authors and all of a sudden other authors were following me. I took the time to look at some of their work and have found some authors who managed to capture my imagination perfectly and surprising quickly.

Now after getting sucked in by these authors i found myself enjoying books for the first time in my life. Because of this i decided to create this blog so i could interact with other readers but also to show these authors that their work is appreciated

As always i welcome suggestions on books/authors i should acquaint myself with so feel free to drop me a line either by commenting below or send me an email davidsbookblurg@gmail.com

You can find it here – https://twitter.com/DavidsBookBlurg

I’ll be using the page to reach a wider audience and will tweet my blog posts along with re-tweeting authors with upcoming releases etc.

Feel free to pop by and give me a follow (I of course will follow you back). I’m eager to start following some fellow book reviewers to see what everyone else is interested in and maybe discover some more authors whose work might interest me

I love the feeling when you pre-order a kindle book and you forget about it… Then you turn your kindle on one day and bam!

At the moment I have 3 books pre-ordered that i’m really looking forward to reading. Let me know what you think and if you know of any upcoming releases you think I should be reading.

This is the third book in the Spartacus series. I’ve loved both of the previous books and Robert’s other work Wrath of the Furies. Robert has taken one of my favorite characters and given him a new lease of life. As we know Spartacus was a real person.. but do we know for certain when/where/how he died? no we don’t… Robert seized on this and has come up with some exciting adventures for him. I started reading the first book in the series after watching the tv series made by Starz Network and i wasn’t disappointed one bit

Brian has wrote a number of books which I’ve read so i’m excited to see what he has come up with this time. His writing flows well so If you struggle with your reading like i do Brian’s works would be an excellent choice for you to read. The author himself suffers with dyslexia and i feel this comes across in his writing which is why the books are so easy to read

3.The Invasion of the Tearling by  Erica Johansen – Release date 16th July 2015

I won’t lie. I really enjoyed the first book. I know some people didn’t but i think that was more to do with the hype of a potential movie starring Emma Watson and the fact the book hadn’t been release yet

The author signed a 7 book deal with the publishers so i’m hoping this series will grow and become something great.