A former journalist from Australia who graduated with majors in history and politics, Prue Batten is now a cross genre writer who enjoys creating fiction from history and fantasy.

She is also regularly commissioned to write short stories for a miniature book-press in the United States, where the narratives are bespoke bound and illustrated, and purchased by miniature book collectors across the globe.

She is also a farming partner, dog owner, gardener and embroiderer, swimmer and kayaker who is about to release her fifth historical fiction book, Guillaume, on the 10th December! she is here today to answer David’s Ten Questions!

Q1 – What would you say to convince readers to read your book?

I like writing about the ordinary man of my era (twelfth century/Middle Ages) who is in extraordinary circumstances. There’s enough action and drama to keep the adrenalin pumping and enough blind corners to keep the brain guessing.

I’m not afraid of using emotion or of creating a world with texture and colour and I’m also not at all afraid to kill off those characters dearest to me. I like the shock factor!

I’d also say that Book One of The Triptych Trilogy, Tobias, was a semi-finalist in the prestigious MM.Bennetts Award for Historical Fiction for 2016 and was also awarded a gold medal by Indie B.R.A.G in 2016. It’s also a finalist in the 2017 Chanticleer Chaucer Awards. So hopefully, readers will find the writing of Guillaume (which is Book Two in the trilogy) just as good.

Q2 –When can we expect the last book of the trilogy to be out and can you give us any juicy info on it?

The sequel is Michael and it will be delivered toward the end of 2018.

Michael takes us back to Byzantium – specifically Constantinople. Readers might remember Tobias’ shattering adventures within that city. The time is only a year further on – 1194AD – and will hopefully be as compelling and dangerous as Tobias’ and Guillaume’s stories.

Q3 – To give your readers some insight into your life as a writer how long did it take you to write the book? Including the editing process and any re-writes you made.

From the moment I begin my research, to writing drafts, to formal editing, my novels take roughly a year each. I’m a slow writer compared to many, but any faster and I would lose my thread.

During the writing, my cover designer is working on my cover, so that by three months before publication, the cover is ready for public release.

After the third draft, the novel is sent to two trusted beta-readers and then the final draft shoots off to Super-Editor-Man, my trusted editor in the UK. He works in two chapter blocks and it takes about a month of to-ing and fro-ing. Then a final read through/line-edit is done. One copy goes to my e-formatter and one back to my cover designer who formats for print.

Q4 – What made you decide to become a historical fiction writer in the first place?

I was writing a fan-fiction story for my blog. It was based on Guy of Gisborne from the TV series. It was fun and light-hearted and I took my Guy far from the familiar Robin Hood trope – what his life would have been like if the dice had fallen in a completely different way.

At one point I found I was researching far more than one would for a light fan-fict for blog entertainment and so I took the story off my blog, re-thought it, re-titled it and thus The Gisborne Saga was born. Also, serendipitously giving rise to the characters of The Triptych Chronicle.

One thing I will add is that I always find the title ‘historical fiction writer’ almost too grand for what I am and what I write. I write what I consider ‘soft historical fiction’ as opposed to the excellent literary work of writers like Dorothy Dunnett, Elizabeth Chadwick and Hilary Mantel. They and others like them are the true representatives of the genre of historical fiction.

Q5 – What are your views on historical accuracy when writing fiction? I note from other books I’ve read in the same genre some reviewers can be quite negative to any inaccuracies.

I think historical accuracy is required where it is possible to locate it in primary and secondary sources. But where there is questionable fact, or diverse fact, I think a Fiction writer is at liberty to interpret as he or she sees fit, as long as they mention it in their Author’s Note. If readers interpret one’s facts differently, then that is the price writers have to pay.

Q6 – Would you contemplate writing a book in any other genre?

I’m what’s commonly called a cross genre writer. I have written a historical fantasy quartet called The Chronicles of Eirie, one of which won a Readers’ Favorite silver medallion for fantasy in 2012 (A Thousand Glass Flowers).

And this year, I wrote a children’s story about a wombat (based on the wombats on our sheep farm) and it’s been illustrated in the UK by the wonderful Dave Slaney. It’s called Nugget and it’ll be released in print for Christmas stockings this year! It’s already available as an e-book.

I love being a cross-genre writer. It’s such an adventure and I think it keeps my writing fresh.

Q7 – Who have been your biggest influences within the writing community?

Oh golly! Dorothy Dunnett, first and foremost! Rosamunde Pilcher, Guy Gavriel Kay, JRR Tolkein, to name just a few of hundreds. In the past Anya Seton, Rosemary Sutcliffe, Henry Treece, Mary Stewart… But truly there are many writers through the years who have all played some sort of role, because I’ve loved reading and books since I was given my first book as a toddler and one learns such a lot as one grows older.

Q8 – What book(s) are you looking forward to reading in the coming months?

Matthew Harffy’s Blood and Blade. Juliet Marillier’s Den of Wolves, Ann Swinfen’s The Novice’s Tale, Selina Seak Chin Yoke’s The Woman who Breathed Two Worlds. And finally, The Penguin Lessons by Tom Michell. A hugely eclectic collection. And hopefully, the TBR pile will be added to over Christmas!

Q9 – Where do you get your ideas from?

My ideas come from obscure sources – a piece of stumpwork embroidery, a paperweight, a piece of paper-cloth, Robin Hood, a piece of twelfth century music, a picture of dwarf minstrel, a Byzantine icon, a wooden cabinet, a map – idiosyncratic little things that whisper in my ear that they just might have a story to tell. The ideas often expand as I walk my dog on the beach or soak in the bath!

I tell myself stories for a long time before I put pen to paper. Oh, and that’s another thing – I actually write in long hand. That’s usually my first draft.

Q10 – Future plans? I’m sure we’d all like to know what you’ve got planned.

A new fantasy as the opener of a new series – title and series name yet to be decided.

The final of The Triptych Chronicle.

A collaboration with one of the UK’s best on a story set between Britain and colonial Australia.

And that’s just for starters! Gosh – I’ll be in my eighties at this rate…

Thanks so much, David, for interviewing me. I’ve thoroughly enjoyed the process of examining my writing life – it’s been fun. Best wishes to you and to all the readers! 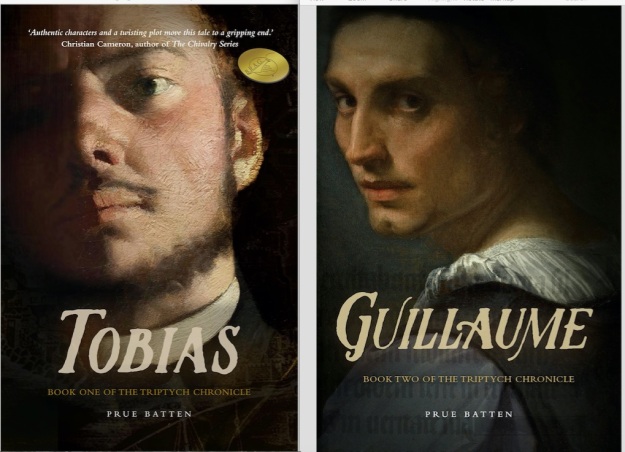 Click here to head to Amazon to check out the upcoming release Guillaume –  myBook.to/Guillaume

To find out more about Prue and her work check out the links below!