Once in a while I like to promo some books/offers that are just too good to pass up.

Well today I’ve seen three books at bargain prices that I’d like you to know about.

The first book is a short story by Pam Lecky called In Three-Quarter Time. It’s only 22 pages so perfect for a quick read. I’ve not read it yet but will be doing so myself this weekend and will be reviewing shortly so I’d love to see what you make of it.

Dublin 1914 and war is declared. Each of the Cusack family must face the consequences in their own way. Josie and her young man, Anthony Lanigan, have plans for the future. But her sister Lily is also secretly in love with Anthony and has no idea if her feelings are returned.

Anthony is about to emigrate to America to make his fortune. Will he ever return, and if he does, who will eventually win his heart?

Set against a pivotal time in Irish history, from the Dublin Lockout in 1913 through the First World War to the brink of the birth of the Irish Nation, this story will take you through a family’s experience of war and tragedy, loss and love.

In Three-Quarter Time is currently FREE! so you’ve got nothing to lose. Click the image above to head to Amazon.

The next book you should all be downloading is The Serpent Sword by Matthew Harffy. You can check my review of the book here.

Beobrand is compelled by his brother’s almost-certain murder to embark on a quest for revenge in the war-ravaged kingdoms of Northumbria. The land is rife with danger, as warlords vie for supremacy and dominion. In the battles for control of the region, new oaths are made and broken, and loyalties are tested to the limits.

As he closes in on his kin’s slayer, can Beobrand mete out the vengeance he craves without sacrificing his honour… or even his soul? 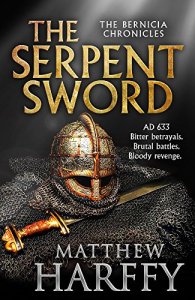 Matthew has become one of my favourite authors and at 99p this is a steal! Click the image above to head to Amazon.

Last but by no means least is The Price of Treason book 2 in the Praetorian series by S.J.A Turney. You can read my review here

Two years have passed since the emperor’s loyal Praetorian guardsman Gnaeus Marcius Rustius Rufinus foiled Lucilla’s great assassination plot. Plagued by the ghosts of his past, Rufinus has enacted his own form of justice upon the praetorian cavalrymen who murdered the imperial agent Dis two years earlier.

But the Fates will not let Rufinus rest. Rome is beginning to seethe with rumour and conspiracy as Perennis, the prefect of the Praetorian Guard, and Cleander, the imperial chamberlain, continue to play their ‘great game.’ With the tide of opinion turning against their commander, Rufinus and his friends embark upon a mission to save the Prefect’s family, only to uncover a plot that runs deep… to the very heart of the empire. Armed with rare and dangerous evidence, Rufinus faces insurmountable odds in an attempt to bring the truth to light. To save his prefect. To save Rome. To save everyone he cares about.

I’ve loved every book I’ve read from this author but boy has he wrote a lot ha ha. If I want a book to read I’m guaranteed to enjoy Turney is the man! At 99p it’s a bargain! Click the picture above to head to Amazon.

Please let me know what you think of the books if you’ve already read them. It’s always fun to read others views on books I’ve read.

Have good weekend everyone!

1 thought on “Looking for a good book this weekend?”